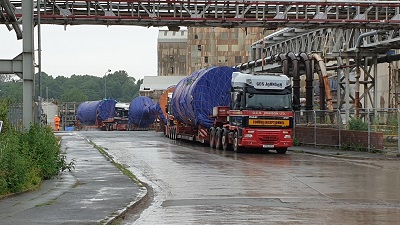 After several months of preparing the site for the installation of the Carbon Capture and Utilisation plant, the process equipment starting to arrive in early June marking an exciting milestone for the project. Designed in collaboration with Pentair Union Engineering, the capture process removes carbon dioxide from the mix of gases in the CHP flue emissions to produce concentrated carbon dioxide gas. The major vessels involved in this part of the process are the flue gas scrubber, the absorber column and the stripper tower.

Following seven weeks in transit by sea from the fabrication site in China, in early June the three major vessels arrived on site (shown in the picture on the top left). Capable of capturing and processing 115 tonnes per day of carbon dioxide - equivalent to the emissions of 20,000 cars - both the absorber column and stripper tower are tall vessels – 48m in the case of the absorber.  It was therefore necessary to fabricate the vessels in sections and transport them horizontally. Having arrived at site the horizontal sections are being assembled by bolting and welding them together prior to installing the access ladders and platforms. 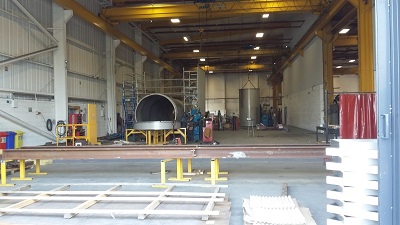 The first stage of the process is to cool and clean the incoming gas in the flue gas scrubber.  The cleaned gas then goes into the absorber column where it is mixed with a liquid stream containing an amine-based fluid that reacts with and captures the carbon dioxide. The carbon dioxide rich liquid is then pumped from the absorber to a stripper column, where steam from the CHP plant is used to heat the liquid. The heat causes the carbon dioxide to be released, leaving the stripper as a gas with a purity of greater than 99.9%.

Throughout June the remainder of the process units, such as the liquification and purification processes arrived on pre-assembled skids and are being stored in a warehouse until the site is ready. Another crucial aspect of the project is large diameter

ducting that will take the flue gas from the CHP plant and transport it to the inlet of the flue gas scrubber. Fabrication of this 1.5m diameter ducting is underway at Cullum Detuners in Derby. These significant items will be transported to site in late 2020 ready for assembly (shown in the photo on the right).

By the end July the final foundations have starteed to take shape and can be seen in the image on the bottom left. The image also shows the flue gas scrubber following installed in the foreground of the site. The two other major process vessels will be lifted into place in mid to late August or early September, transforming the appearance of the site. Given the size of these vessels, special lifting equipment is required as is good weather during the lift.  The foundations for the liquefaction plant are now also well advanced.

Once the major vessels have been installed, the rest of the process equipment can be fitted and the pipework, electrical and control systems connected. This is now scheduled for Autumn 2020.

Projects Manager Stewart Prentice, said: “Seeing the process equipment start to arrive on the site gave the Project team a real boost.   It has been challenging due to the pandemic, but this hasn’t dampened the teams’ enthusiasm and energy to complete the build which will enable the great environmental benefits of this exciting project to be realised.”